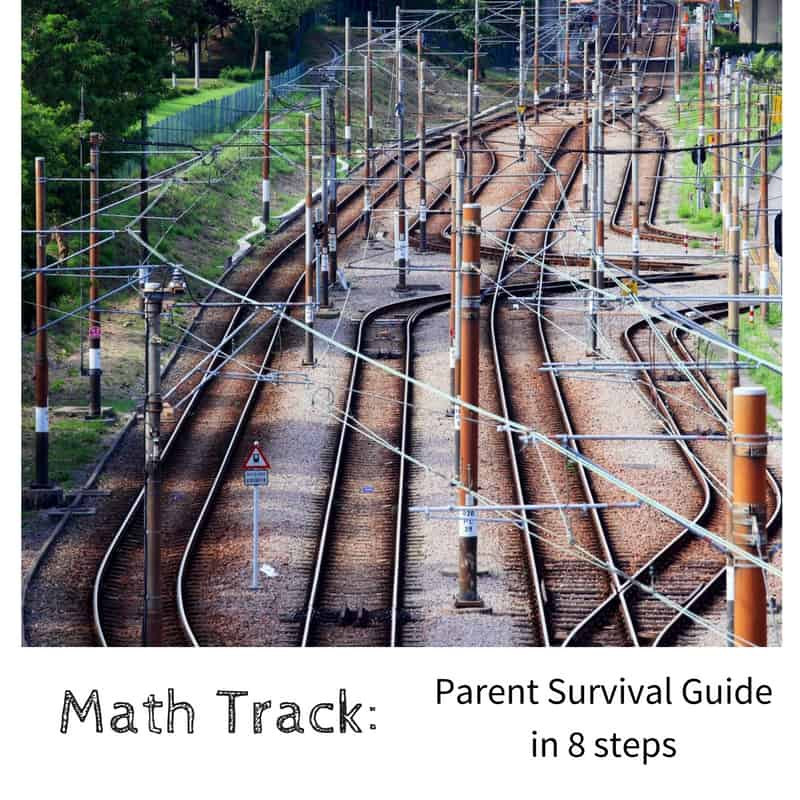 The right math track helps each child learn the subject to mastery, building a strong foundation for future success.

Sorting kids into a math track starts as early as 6th grade and in the majority of US schools by 8th grade. Here is how it works in a typical suburb.

1.  Understand when and how math tracks are assigned

In Spring of 6th grade a single algebra placement test is given.  This is the primary opportunity to be in the highest level of math and (later) science courses. Criteria are probably published in your school’s student handbook and may also include IQ and standardized test scores. Based on those results, Kids will be sorted into one of several tracks. For example, if tracking begins in 7th grade then there could be a placement exam in March or April of 6th grade.

Many districts use objective criteria and exclude teacher recommendations in order to make the process fair and to minimize time spent discussing placement decisions with parents.

Kids with the highest scores skip both 7th and 8th grade math completely. The following year they will be eligible for Geometry and enriched science. The percentage of kids qualifying for this track varies from year to year, perhaps from 2% to 10%. Middle school algebra often covers both high school algebra and a brief overview of topics others covered in 7th or 8th grade.  As a result, “honors” sections might be reserved for middle schoolers.

Most students are here in our New Jersey suburbs. In rural or urban schools it might be the only option.  Since the SAT’s include algebra and geometry, this track can still position students for great scores on their SAT and careers in STEM. In high school this track is often referred to as “College Preparatory.”  It is doing just that, preparing kids for college.  The majority of kids are in this track, including many who go on to study STEM fields.

There may be class sections that are co-taught by a regular education and a special education teacher. The material might be  the same or somehow modified for children needing extra supports. E.g., extra time for tests. Depending on the kids needs it might not be offered every year.  Some sections might have a less qualified teacher’s aide instead of a co-teacher.

Why don’t schools explain it up front?

Schools often don’t tell families much about placement exams. It may be because some families get so worked up about them, especially in high performing districts. While it hurts everyone for a child to be in the wrong track, I initially found it hard to tell where my own kids should be.  The approach outlined below helped me and many of my friends to prepare.  If subjective criteria like teacher evaluations are included, the school risks spending more time addressing parent challenges

2.  Which math track is right for my child?

If your child is put in an accelerated math track, especially Algebra then be a bit careful.

Honors Algebra is a full on high school class and covers the same material as the 9th graders will see including a comprehensive mid-term and final exam. This can be a bigger jump than kids or parents expect.

At the end of first quarter some parents get a call suggesting their child drop down a level.  Many of these families could have easily helped with homework but get caught be surprise with the sudden jump from 6th grade to high school expectations.

Instead of having to make a big, high risk decision for my own 6th grader when I felt like I didn’t have enough information, I learned to encourage my kids to do the timely preparation, as I’ll outline below.

4. What to expect in high school

Math sequences vary. Algebra and geometry might come first to followed by trigonometry, algebra II, and pre-calculus. They can be combined in various ways with different names.  The content in Calculus AB and BC is more standardized for high schools participating in Advanced Placement testing.  There may be some opportunities to step up or down a level, but not every year.

Many schools won’t (officially) let you double up to move ahead a year or catch up with the kids who were strong early on.  This is the part that many parents and kids only realize later.  Sometimes schools allow kids to self study (or take an outside class) and skip a track.  In my experience the drive to move ahead of peers should come from the child. We parents try to educate them about their options.  One of mine did against parent (and grandparent) advice.  It may have contributed to later burn out.  There is an opportunity cost either way.

5. Preparing for college, or community college

6. Prepare for math tracking- Start early and learn to mastery!

My pre-high school mantras are “For every two hours of free screen time, do two hours of educational screen time.” and “grow your brain.”  They kind of know I’m right once they get into it.

For my own kids this occurs once they’ve gotten the routines of the school year down, feel comfortable in their classes and start to need some new challenges.

Being a self-directed learner is powerful.   Cultivate your curiosity and they can grow their brains with what ever subjects interest them. Their topics range widely so I ask them to give me their top five things to do this season. Then we’ll get library books, take field trips and explore all the relevant web sites we can find.  We make the most of existing clubs and opportunities. When we needed to fill gaps we ucvts-np-stem/” target=”_blank” rel=”noopener” data-cke-saved-href=”https://stemshoots.com/science-olympiad-ucvts-np-stem/”>strengthen exdeisting clubs , attended events at local museums and organized STEM field trips.   Do what we can to fan intrinsic motivation and excitement, which works for a while.

Parents role is to encourage daily completion of assigned homework. Trying but getting a wrong answer is also valuable.   Then bring questions to the teacher during class, before or after school.

Here are other K-12 math websites.

Peers – A friend in their class might help. Explaining to others helps us solidify our own knowledge. National Honor Societies often require members to provide tutoring to fellow students for free.

Tutors – Many families use tutors successfully.  Some kids do better with a live person or struggle with a “flipped class room.”  We have the means to do so, and I’ve offered my kids the option, but they’ve never wanted a tutor.

Parents – My husband or I are able to help with most of the math, but our kids rarely ask for our help.  They prefer Khan Academy.  Both of my own parents taught college level math, but I dreaded asking them as well.  I just wanted the bit I needed for tomorrow’s lesson. So if your kids are over-achievers, under-achievers, rich, poor, neurotypical, or have special needs I still recommend you start with Khan Academy.

We all do best when we have a voice in setting our own goals.  Remember it is a marathon not a sprint, so keep it light and fun.

7.  If you don’t get the math track you hoped to

If you don’t get the result you expect, then I’d inquire as to which criteria your child missed. I’ve seen the culprit be a missing IQ or standardized test score or even another child in district with the same name.  Also, transfer students often miss out even if they had qualified in their former district, so I’d ask in your old district and the new and provide data.

How I came to care about math track placement

My middle child walked out of his algebra placement test and realized that he’d made a mistake at the beginning of a multi-part question and then missed all the subsequent parts.  When he got his placement letter a few months later, he placed lower than he thought he should.  I just didn’t know.  At his request we inquired & then appealed his placement.  Since his grades and test scores were very strong we put him in 7th grade Algebra.   However, we were warned that he had to finish the year no matter how he struggled.

Personally, I wouldn’t have taken the risk, but he and his Dad were for it.  In retrospect, I would have been wrong and it was the right choice for him.  He’s finishing 4 years of calculus in high school, in part because he had such a solid foundation.  His sister saw him give up 2 summers to get there.  She is choosing her own path.  Self motivation is far more powerful than something external (like a parent) pushing you.

In 3rd grade my husband took him aside and said he had two choices.  He could study “Mom’s way” or, if he kept a 95% or above on every single assignment, then he could work independently. But, if got a grade lower than that on anything then for the next month he’d have to work with me.  For him that approach worked and he’s been independent since. Each kid is different, including my own.

Another kid’s goal might be turning in 100% of their homework and paying attention in class. Other kids aren’t  ready for the abstractions in Algebra until later, and still go on to successful, math heavy careers.

The summer between 3rd and 4th grade I asked all three of my kids to master the previous year’s work in Study Island. This was back in the days before Khan Academy.  I expected 2 hours of educational screen time before they got 2 hours of free screen time.  My middle son wanted to game, so he mastered the previous year’s math and English to get me off his case. That was the year that he went from being a good student to a great student.  In middle school he used Khan Academy etc. to study for entrance exams and math placement exams.  While he didn’t always reach his goals the first time, a solid foundation helped him along the way.

By my third child, I had learned.  At the end of 5th grade I told her she had a choice:

Our relationship benefited from mutual respect.  She chose to study for the algebra placement test.  Others tell me they’ve found this advice helpful. One of the hardest parts of parenting is giving them the freedom to make their own choices and mistakes.

Walking fine line between mastery and working too far ahead

Note that while she found she could work ahead on the algebra placement test subjects, she couldn’t work ahead in 6th grade math. She wound up painfully bored.  We also met with her math teacher at the beginning of the year and made it clear we would support the teacher’s wishes.  We sent in a Math Olympiad for Elementary and Middle School book if she finished early.  She used it some in class and for a 6th grade parent-led Moems club.

8. Arguments for and against assigning a math track

Some suburban districts start assigning math tracks earlier.  In urban district ones of the arguments against math tracks before high school is that poorer and otherwise disadvantaged youth are less likely to be placed in a higher math track.  Wouldn’t it be great to help raise the math level for all our kids?

by the Brooking Institute

Have insights that you think could help your community and school do better?  These past posts my help.

PSST!  Know someone who might find this Survival Guide useful?  Please send it to them, quickly before you forget!  Also, pass on any survival tips of your own in the comments below.