Umbrellas on your way to school 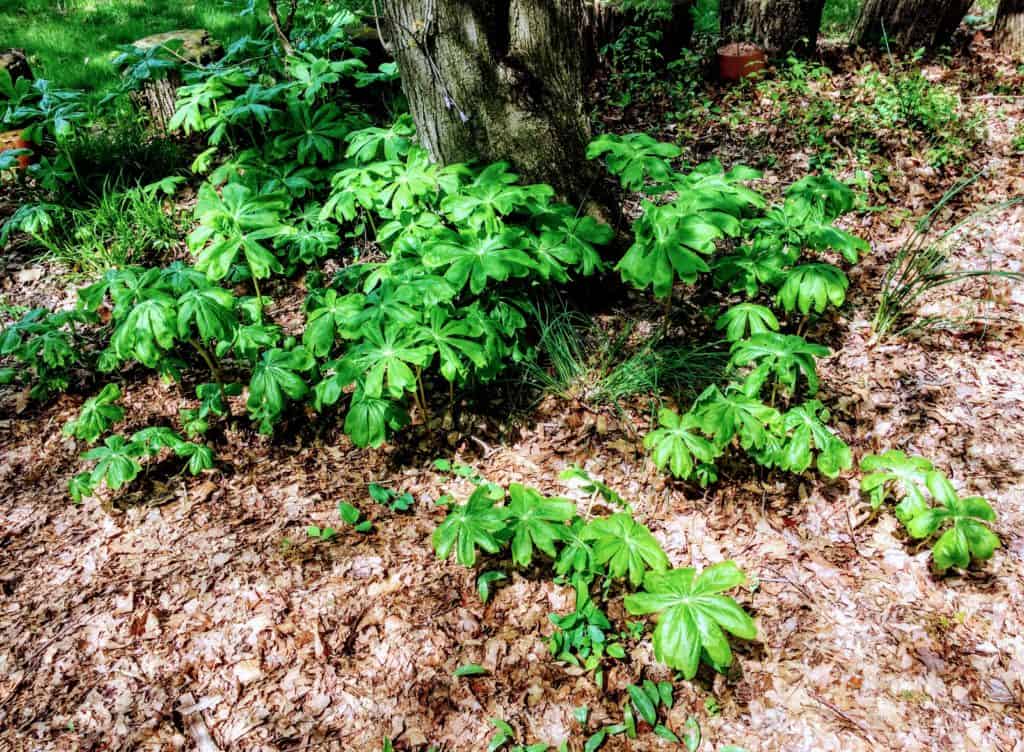 The mayapple is one of the first plants to appear in early spring. A single white flower beneath its leaves gives off a strong musky scent. This plant is known by many names, such as the ‘mandrake’, ‘Devil’s apple’ ‘raccoonberry’, and, ‘podophyllum peltatum’. One can identify the plant by its peculiar shape: some claim it looks like an umbrella or a duck’s foot. It can grow to be two feet tall, and one foot wide. 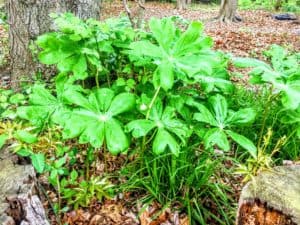 Queen bumblebees are especially attracted to this member of the Barberry family. But for humans it can be especially poisonous. A. The American-Indians used the plant both as a poison and an antidote for snake bites. It still has uses in modern medicine. Recently, studies show that the plant can help with the growth of tumors, lung cancer and syphilis.
After its initial bloom, the leaves will go from bright green to spotted with yellow. Later, in mid-summer, it will fade to a yellow shade.

Mayapples may put up to 40 percent of their energy into underground rhizome compared to only 8 percent of its energy into sexual reproduction.  The rhizome, a horizontal underground stem, is the main method of producing new plants.  A colony of Mayapple plants may all have developed from a single seed.  A seed, once it germinates, will not form a rhizome until it is over five years old and may not produce blooms until a plant is 12 years old.  Colonies grow at a rate of 4 to 6 inches per year, and very large colonies may be more than 100 years old.  One colony may contain up to 1,000 shoots.  If an individual plant has produced mature fruit during a given season, it will have decreased rhizome growth and a decreased chance of being forked the next year and bearing flowers.  If a plant does not produce fruit, or if it is a single-leafed plant, the leaves usually senesce (die back) by early summer.  Leaves persist in plants that have maturing fruits.

Mayapples are one of the most noticeable Spring flowers on your way to school, if you walk by any moist, hummus-rich wooded areas.  For example, the back path to Allen W. Roberts from Commerce Drive or many backyards.
The leaves often pop up and unfurl in early March or the first while the flower blooms in May.  Mayapples spread slowly, with colonies spreading 4-6″ a year.  Encourage our kids to tread lightly around the edges of a grouping.  Once a seed germinates it might not produce a flower for 12 years.  Single leafed plants don’t produce fruit and the foliage has often faded by late June.
In some places it covers the forest floor as can be seen in Reeve’s Reed Arboretum’s upper Woodland Trail between the Wisner House and Hobart Avenue. Such very large colonies might be 100 years old.
While you’re looking for Mayapples look out for Dangerously Beautiful Poison Ivy on your way to School in New Providence.  Find out more about our Safe Routes to Allen W. Roberts and New Providence Middle School.

Sukhie Grover is currently an eighth grader at New Providence Middle School. She enjoys playing soccer, doing karate, traveling, and doodling. She lives with her parents and a dog.